If a picture is worth a thousand words, what is this? 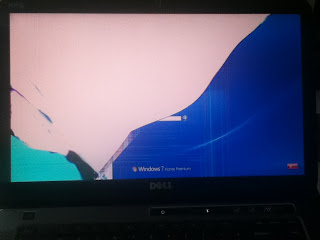 Had enough time to contemplate the artisitic rendering? It is... a laptop screen, still attached to the laptop, after it fell out of it's protective case, bounced on a rug, and voila!, became art! Add the price of an external monitor to use the laptop while waiting for a replacement screen, and the cost to replace the 3 month "new" laptop screen and the Tutor's client had a Monet masterpiece!

Seems the protective case the laptop was being transported in, wasn't zipped up. The laptop unceremoniously slipped out. Oops and double ouchie: an ouch for the laptop and and ouch for the wallet. Thankfully, there was no internal bleeding, all other parts were tested and deemed stable.

ALWAYS REMEMBER: before calling for help - is it plugged in, is the ZIPPER zipped, and is it turned on?

Unplugged
Posted by The Tutor at 8:38 AM No comments:

The distressed voice message said "please help,  the computer is playing the bongos". Really?  A repetitive bongo-like noise was coming from the all-in-one MAC computer upon awakening. And, after a new wireless, large-print keyboard was installed the day before, a message flashed "wireless keyboard batteries low".

The bongo noise certainly caught the Tutor's attention. Turns out, when the Logitech keyboard was placed out of the way for the new keyboard, it was resting on top of the Apple wireless keyboard... which shouldn't have mattered except... it still had the batteries in it, and was still active, even though it wasn't being used by the owner of the MAC. Many readers may know, if one presses a key on a keyboard too long, it begins to make a noise, to get your attention. It's really screaming "GET OFF OF ME".

The unused Apple wireless keyboard had been sitting behind the large monitor, looking harmless. It still had the batteries in it, and the MAC was still "discovering" it via the bluetooth feature that allows the MAC keyboard to be used WITHOUT a separate USB component (sort of like the way a remote finds a TV).

The discovery of the bongo sound, led to the solution for the "low battery" message as well. The entire low battery message began with "the Apple wireless keyboard" has low batteries (great example of why the ENTIRE error message needs to be written down).  Indeed it did. It had been sitting idle for more than a year (impressive battery time) but no one had known to:
Once the Apple keyboard was moved from under the Logitech keyboard, the bongos stopped playing and the battery message disappeared as the keyboard was moved so far away, that Bluetooth couldn't find it.

Another chapter closed in Tutor sleuthing.

ALWAYS REMEMBER: before calling for help - is it plugged in, is anything laying on it, and is it turned on?

Unplugged
Posted by The Tutor at 8:58 AM No comments:

Can You See the Technology?

Anyone remember the Highlights Magazine, with the hidden pictures the reader was challenged to find? The Tutor remembers, as the magazines were a staple at her pediatric dentist's office. Well this is a technology version of Highlights:  how much technology can the reader "see"?  Take a look at this photo of the Tutor behind a sponsorship sign for the Danvers Rail Trail. Can you determine the number of technology components required from Tutor to signage?

Could you identity ALL the technology required for ONE sign??

ALWAYS REMEMBER: before calling for help - is it plugged in, is the technology in place, and is it turned on?