Shamelessly mixing the two seasonal holidays by giving thanks on the other holiday's card stock! 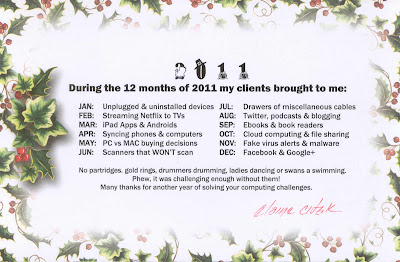 Unplugged
Posted by The Tutor at 2:41 PM No comments:

That Nice Man from Microsoft Phoned Me...

WHAT?? First of all, no one from Microsoft will ever call you. If one was thinking rationally, how would Microsoft have your phone number (and why?) to begin with... and how would they know anything about the computer in your household?

A client was phoned this week (Nov, 2011) by an Indian "gentleman" who claimed to be from Microsoft and "noticed the home computer was running slowly" and wanted to help solve the problem, for a mere $ 199.00. The client was very skeptical, but the caller was a pro and utterly convincing. The client's radar was up, they asked many questions; they received a phone number to call them back, and a website address that looked legitimate (not that hard to make a professional website). The client did call them back and a person answered (did the Tutor mention these scammers were professionals?) and hence the scam commenced.

Suffice it to say, the client not only gave the caller access to the computer, but also gave them a legitimate credit card number after spending 2 hours on the phone with them. One might ask, what exactly were they doing to the computer for two hours anyway? As luck would have it, the client had no personal or confidential information on the computer. The caller tried to walk the client through many steps, but the client was such a novice, that thankfully, they were unable to perform anything they had been asked.

The client finally hung up and immediately called the credit card company to report the fraudulent charge, and put a hold on any charges for the next several days (subsequently, the client called to request a new card number). Then the client called the Tutor, asking for help. A cyber crime report was submitted online and a detailed letter was penned to the credit card company in support of the fraudulent claim. The Tutor ran some tests and some security scans to ensure that the computer had not been compromised. A pricey lesson in security.

The very brassy "technician" called the next morning, immediately asking "is your computer on?" at which point the client hung up and attempted to call them back. Of course, no one answered the phone. Caught in the act? Doubtful this can be traced. It is easy to hide in cyber-world.

ALWAYS REMEMBER: before calling for help - is it plugged in, did YOU initiate the support telephone call, and is it turned on?

Unplugged
Posted by The Tutor at 9:18 AM No comments: