HP: Coming Apart at the Seams 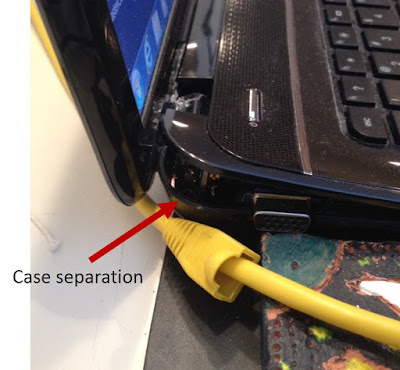 The Tutor's client closed the HP Pavilion laptop, and went away for a week. The laptop was unattended in a second floor, heated office. When the client arrived home and opened the laptop, the left side of the case had lifted, separated completely from the laptop. It visually appeared as though someone had melted the case! HP is aware "of the problem", and offers nothing to the owners of the HPs that developed this problem. Shame on HP.


ALWAYS REMEMBER: before calling for help - is it plugged in, is it in ONE piece, and is it turned on?


Unplugged
Posted by The Tutor at 7:41 AM No comments:

No, it's not a post about oral hygiene. But it is about using the wondrous little pick to provide a solution to what would have been an expensive fix.

A 3-year old HP Pavilion laptop developed an interesting problem about a year from purchase. The wired Ethernet port on the side of the laptop was loose. It would allow for the insertion of an Ethernet cable (we tried several different cables), but the weight of the cable just resting on the desk, caused it to regularly lose the internet connection. The light would go off so it was obvious the connection was out before the browser blurted out "no connection" on the screen. If one placed a "bridge" under it the cable near the insertion point, something like a half inch high tile, it would provide some stability. However, if anything moved either the tile, the cable or the laptop, the internet connection would go out... again.

Use wireless, you say? The router was in the basement of this home and the office on the 3rd floor. The HP's wireless component was not strong enough to pick up the signal (iPhones wouldn't pick up the signal either). And no, we didn't try a signal booster...

So, after much frustration from the owner, the Tutor had an idea, garnered from installing lock-sets for doors. The Tutor brought along a lowly wooden toothpick and pressed it into the Ethernet slot along with the Ethernet cable. Voila - a tight fit which didn't budge when jostled by anything.

ALWAYS REMEMBER: before calling for help - is it plugged in, is it TIGHT, and is it turned on?

Unplugged
Posted by The Tutor at 7:03 AM No comments:

Shall we blame it on the weather? This mal-functioning printer spewing forth a "printer not responding" message? That would be easy to do, as was the dual-action fix.

The client's printer was seriously speaking in blinking light language. Some readers may be aware that the number of blinks in a blinking light cycle is indicative of "the problem". For example, it may be that for the reader's printer, one blink means no power, two blinks signals an empty cartridge, 3 blinks, a paper jam, etc. The first problem was an empty ink cartridge and it was blinking constantly. Oh those were the days my friend when one could still print with an empty cartridge. "Those days" are long gone.

Off to the store the client traipses, in the middle of a snow storm, to fetch another cyan cartridge. (Even wonder why they just don't call it blue?? Ask an artist.) Cartridge properly inserted, still no printing.The client calls the Tutor the next morning. The printer miraculously began printing late on the previous day, then was up to its old tricks again: printer not responding.

The Tutor arrived and from the looks of things, the printer should have worked... but it didn't. And why did it have a blip of functionality then nothing? The printer was attached to a laptop via a USB cable AND a USB extension cable. (Most USB cables are 6' long and this one was a tad short to reach up, down and around.) The weight of the two cables pulling ever-downward slightly dislodged the USB cable from the side of the laptop. If one didn't look closely, it appeared securely plugged in. But alas, it was not. A quick push of the cable back into the USB and the printer was cured. It's a miracle... NOT!

Why did the printer work the day before for only a few minutes? Best educated guess is the laptop was bumped giving the USB cable just enough movement into the port for a brief connection. Then the weight of the cable dragged it out once again.


ALWAYS REMEMBER: before calling for help - is it SECURELY plugged in, and is it turned on?

Unplugged
Posted by The Tutor at 11:17 AM No comments: