This is where it all happens, the Tutor's computing sanctuary. A Dell tower XPS is the driving force, dual monitors increase productivity (notice each monitor depicts a different program), wireless mouse and keyboard, standard issue writing implements, thirst-quenching drinking vessel, sundry in-process papework and the now necessary reading glasses. What you don't see is the HP Laserjet Pro MFP M426fdw printer, the Apple 17" Macbook, the first generation iPad, the iPod, the iShuffle, the Kindle, the Canon digital camera, the headphones, and paper supplies. All necessary? If the Tutor's clients didn't use all of them, they would not be necessary! 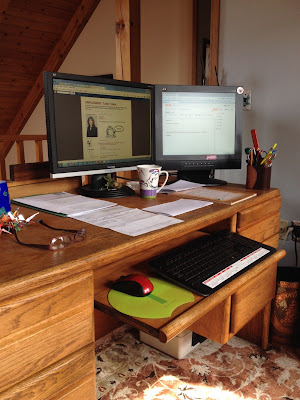 Unplugged
Posted by The Tutor at 9:56 AM No comments:

The Computor Tutor has a new TWITTER hash tag! 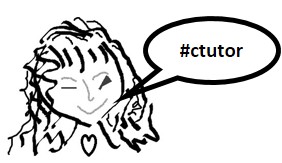 Unplugged
Posted by The Tutor at 10:21 AM No comments:

Too Much of a Good Thing

The Thunderbird email program is a popular competitor of Outlook, and it's free. A recent client had a most unusual experience with Thunderbird. Each time the Thunderbird desktop shortcut was used to open the email, more than 50 copies of the Inbox opened (not a typo), one atop the other. The client had to wait for all the inboxes to load before having access to the email. Much patience was required, this was not a quick process.

Although the fix was simple, the diagnostics were more time-consuming. Instead of using the shortcut to open Thunderbird, the Tutor located the file (called an executable) that makes Thunderbird go. When Thunderbird was started from the original file, instead of from the shortcut... only a single copy of the Inbox opened.

The solution: deleted the shortcut on the desktop and created another shortcut. Problem solved, though it remains a mystery why the original shortcut became corrupted. It was IDENTICAL to the newly created shortcut. Go figure.

Unplugged
Posted by The Tutor at 4:26 PM No comments:

We do love our laptops, don't we? And the keyboard placement that requires an over-reach of the hands and arms to use the keyboard? Not so much. The Tutor's 8th grade typing teacher would have a field day with the improper placement of hands when "typing" on a laptop keyboard.

The placement of the keyboard at the rear of the laptop puts the typists' hands and wrists in a position that grazes the touchpad, causing the cursor to jump to an unwanted position on the typing page. Ah, yes, you say. I hate when that happens. You may not have touched anything intentionally, but the slightest flick of the wrist across that sensitive touchpad may cause cursor relocation.

There are a couple of solutions: one is to use a mouse instead of the touchpad. Most touchpad software has a feature that will shut off the touchpad if it "discovers" an external mouse in use. And... it will re-enable the touchpad when the mouse is not being used.

Don't want to use a mouse? A simpler but less elegant solution is to cover the touchpad with an index card or paper of the same size as the touchpad. The paper covering prevents the accidental touching of the pad while typing.

We all, I think, know that updates to our software programs are important for many reasons. We all, I think, have also encountered misbehaving software after an update; if the updates were automated, the reader may not have easily put one and one together to ascertain that it was THEM (the update) and not you when you tried to do something that worked just fine yesterday.

Windows 10 had a recent update which may have reset many default programs and settings that YOU might have spent time tweaking. You might have encountered this fairly quickly when you clicked an internet hyperlink in an email or when reading something of interest on the internet and it opened Microsoft EDGE, the newest browser from Microsoft when you would have bet your life savings that you changed it to Firefox, Chrome or the Internet Explorer.

You aren't crazy, and you didn't do it. Microsoft did, though by accident. They apologized, though they cannot change them back for you. Boo hoo.


ALWAYS REMEMBER: before calling for help - is it plugged in, was there an update involved, and is it turned on?

Unplugged
Posted by The Tutor at 8:21 PM No comments: